The restoration of Hull’s Guildhall has taken another step forward after 12 stone putties were lifted into position.

They will play an integral part in the return of the building’s famous Timeball, which will takes pride of place on the city’s skyline.

The work is being carried out by Yorkshire and Lincolnshire construction firm, Hobson & Porter, and is funded by The National Lottery Heritage Fund. 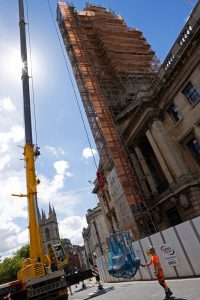 Hobson & Porter has already completed a major re-roofing programme at the Guildhall and in recent months the company has been restoring the Timeball and its internal mechanism as part of phase two of the project.

Improvements and repairs have also been made to the clock tower and its stonework.

This month, 12 sections of Portland stone, weighing a total of five tonnes, were lifted more than 70 metres into the air by crane, before being lowered onto a specially built reinforced deck above the clock tower.

Each piece of stone has been repaired or replaced by specialist stonemasons from building restoration company, Stone Edge.

The team from Stone Edge have now secured them into place ready to support the bowl that the 50kg Timeball will drop into at noon each day in winter and 1pm during summer.

Dating back to 1918, the Timeball was a navigational aid chosen for Hull due to its importance as a trading port, and its local connection with clockmaker John Harrison, who in the 1700s devised a method to accurately determine longitude at sea.

Liam Brown, site manager from Hobson & Porter, said: “This was a precarious part of the project. Each of these pieces of stone has either been restored or newly made, and each one had to be lifted and carefully, manually moved into position to sit below the new weathervane, which has been modelled on an 18th century merchant ship, and the new Timeball, which is the highest in the UK.

“This is a crucial and unique feature within Hull’s Maritime Project and will preserve part of the city’s maritime history, so it’s been a real pleasure to oversee this latest successful milestone in the Guildhall’s impressive restoration.” 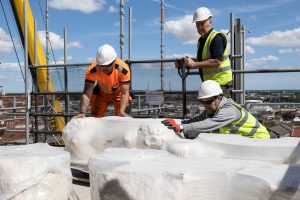 Councillor Mike Ross, leader of Hull City Council, said: “It is great to see National Lottery Heritage Fund investing in one of Hull’s historic buildings like this, and exciting to see the final stages of the Timeball restoration project take place.

“Lifting these pieces of Portland stone was a delicate exercise and it will now enable the work to progress further.

“The Timeball is an important timepiece in Hull’s maritime history, and I am looking forward to seeing it work once again, 100 years since it last dropped.”

Construction begins on latest phase of industrial and logistics hub