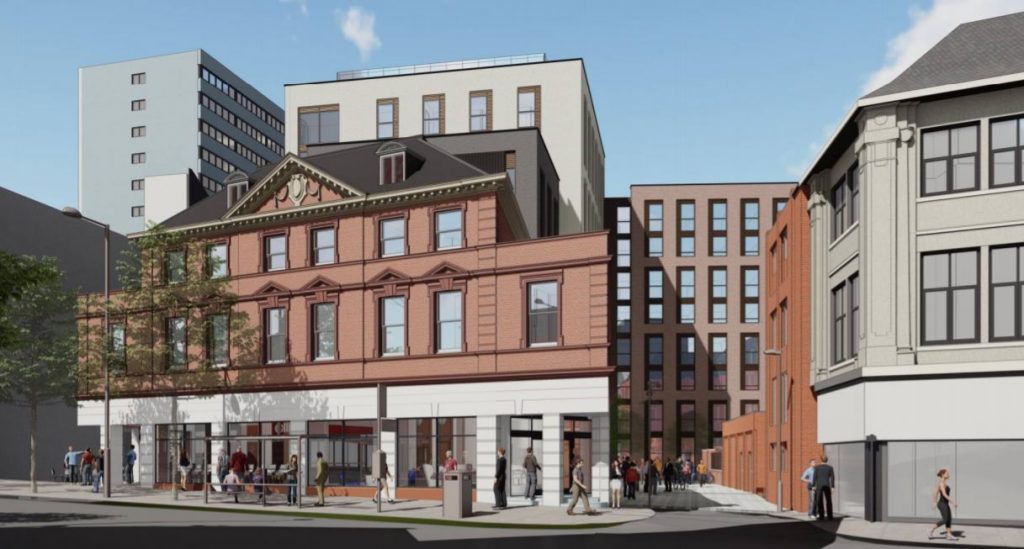 How the Lombard House scheme could look

One of Nottingham’s most active developers and investors says it wants to make a “significant positive contribution” to the city after agreeing a partnership deal to develop out a major site.

Bmor signed an agreement this week with Unite Students to bring forward the wholesale redevelopment of Lombard House on Lower Parliament Street in the city centre and turn it into a £34m, 270-bed student-led residential scheme.

Bmor will now work in partnership with Unite to demolish the rear warehouse section of the Argos and build out towards Glasshouse Street at the junction with Kent Street.

Paul Irwin of Bmor told TheBusinessDesk.com: “The current character of the area is ill defined, but has historically been driven firstly by the construction of the Victoria Railway Station and then by its replacement by the Victoria Centre in the 1960s. This has been exacerbated by the intervention of Huntingdon Street and its associated highway network which has left the site isolated.

There is now a poor sense of place where the area is dominated by the Victoria Centre flats, the expansive highway network and service yards.

Bmor bought the site in 2019 in a joint deal with Aon. It is currently occupied by Argos.

Irwin explained the rationale behind the development. He said: “Our aim is to make a significant positive contribution to the local heritage via the renovation of the Argos building and the creation of a new attractive backdrop to the northern end of the Lace Market Conservation Area.

“We also want to improve the safety, attractiveness, and animation of the adjacent public realm and to improve biodiversity and green landscaping in the immediate area. When we consulted locally during the planning process there was significant local support for the Development.

“We worked closely with Nottingham City Council to achieve a scheme that would enhance the area, with a beneficial planning consent for all and with such a successful outcome on the scheme for both Unite and Bmor, the deal was both smooth and swift. All parties are now looking forward to the launch of the completed scheme.”

Bmor is currently involved in schemes across Nottingham, including the future IQ operated student scheme on Lower Parliament Street, which will bring forward in excess of 200 beds & is due for completion in June 2023, Goosegate in Nottingham (reactivating a vacant retail unit, plus 100 beds), The Heathcote Building in Hockley which is a 32,000 sq ft office refurbishment with ground floor retail, the former Radford Boulevard School scheme on Ilkeston Road (158 beds) and the social housing scheme at the former Grove pub in Lenton (27 apartments).

The firm works closely with local Nottingham family and developer Sam Burt, who undertakes a lot of regeneration and repurposing projects around the City. They specialise in bringing old buildings back into use and have brought some quality Operators such as Rough Trade, Bar Iberico and Mesa to Hockley. The family is currently bringing forward 74 units at the Grains building in the Hockley and they are nearly finished the large redevelopment of Sneinton Market. They are in discussions with a a prominent independent food and leisure operator to run the Market once complete.

Irwin added: “We want to be part of regenerating neglected areas & buildings of Nottingham city centre – especially around the Hockley area, which was recently named as one of the 12 “coolest postcodes to move to in 2022″ by The Sunday Times Style Magazine. We’d love to find more rundown buildings to refurbish and reposition. We are aiming to reduce our Carbon Footprint & the best building is an existing one. It’s brilliant to see how this part of the city is thriving. This is a big year for us – and we aim to deliver.”