The transformation of a Grade II-listed former office building on Castle Street in Liverpool into 33 boutique hotel apartments has been given the green light.

The Prosperity Capital scheme, located in the heart of the city’s thriving retail and business district, will see the sensitive conversion of this heritage building which has been vacant since 2016.

The proposals, designed by architects Cartwright Pickard in collaboration with planning consultancy WSP | Indigo, include a mix of first and second floor studio and one-bedroom aparthotel rooms complete with cooking facilities, and a shared communal lounge area.

An accessible unit will be positioned on the ground floor of the building, alongside existing retail units which are currently occupied.

Work is expected to start on site by the Summer and completed by late first, or early second quarter of 2021.

The development is part of the Castle Street Conservation Area, set up to preserve the architectural heritage of the district which was formerly the heart of the city’s banking and commerce industry. 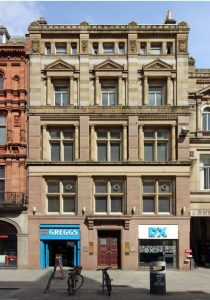 Key to the proposals is the preservation of the exterior of the building, which was originally designed by Liverpool architect G E Grayson in the ‘commercial’ classical style of the Victorian period, while sensitively renovating the interior to create a development that maintains the character and heritage of the site.

Becky Dewey, associate director at WSP | Indigo, said: “We’re delighted to have helped our client, Prosperity Capital, achieve planning permission for this scheme which will help breathe life back into one of Liverpool’s most architecturally stunning buildings.

“Serviced apartments and aparthotels are the fastest growing sector of the UK’s accommodation market, offering business and leisure travellers facilities much like a traditional hotel, but with added space, amenities and privacy.

“The opportunity to conceive this offer within a building of such architectural character will add a truly unique experience to city’s hospitality offer.”

Green light for next phase of New Islington development