Oak View Group (OVG) has appointed the Royal BAM Group (BAM) as its preferred construction partner, and Populous, a global architecture design firm, to lead the team behind its proposed new 23,500-capacity arena in Manchester.

It says the venue would be the largest arena in the UK, bringing £350m private direct investment into the city and significant economic benefit.

This follows an announcement last week that OVG – the global sports and entertainment company founded by Tim Leiweke and Irving Azoff in 2015 – had submitted formal plans for the arena to be built in the Eastlands area of Manchester.

The submission resulted in a call by ASM Global, operators of the 21,000-capacity Manchester Arena next to Victoria Station, to urge city planners to apply thorough scrutiny to the proposals, arguing it would damage trade for city centre leisure operators and hoteliers.

OVG said, known for its people-centred approach, BAM has built stadiums across the world, and has been active in the North West since 1933, having built the City Football Academy, the National Graphene Institute and the Co-Operative Group HQ.

OVG said it is also pleased to confirm Populous as the principal architect and designer of the new venue – a firm which has helped OVG place inclusivity, safety, and sustainability at the heart of its plans.

The developer says the new arena will deliver the best in class artist-fan experience for any arena in Europe, have the flexibility to accommodate multiple event types so Manchester can host a broader range of music, sport and entertainment events, and would be the most sustainable arena in the UK.

Alongside BAM and Populous, BuroHappold, ME Engineers, Vanguardia, Turner & Townsend and Deloitte will make up the project team that will deliver its new arena, OVG revealed.

It said members of the team have unrivalled experience on working on global iconic entertainment and sport destinations and will assist delivery of OVG’s vision of building the best venue in the UK and Europe.

Tim Leiweke said: “I’m thrilled that we have put together a project team of such calibre, and with such strong links to the beating heart of the North West – Manchester.

“While we are living in uncertain times, we know that Manchester and its people are resilient. And we look forward to being intrinsic to the redevelopment of the east of the city, working in close partnership with local people who are the most important part of this project.

“Manchester is a thriving and vibrant city – and along with BAM, Populous, and our other incredible partners, we are excited about a new addition to its entertainment scene in the coming months.”

As well as creating a talented project team to design and build the new arena, OVG said it would ensure that jobs and employment opportunities at Manchester Living Wage or higher are made available to residents – 3,350 jobs during construction and more than 1,000 once opened, it claims.

Ian Fleming, regional director for BAM in the North West, said: “Manchester has become a vast and vastly impressive city. Nevertheless, this visionary development will stand out for a long time to come.

“Having built some of this incredible city’s most important and recognisable structures, BAM is a perfect fit for the scale and quality of the scheme. We bring a highly sophisticated and sustainable construction approach coupled with our well-known collaborative ethos.

“What that means for Manchester is not only a world-class arena, but our commitment to the city as good partners will see us use this fantastic opportunity to help develop skills and people’s life chances, as well as generating exciting local economic benefits.”

Declan Sharkey, senior principal and project architect at Populous, said: “This ground-breaking venue will set new benchmarks in sustainable arena design, as well as creating an experience and form that sits perfectly within Manchester’s architectural context and vibrant community.

“We are delighted to be working with Oak View Group on its exciting vision for East Manchester.”

OVG said its planning application is underpinned by the following principles:

Market analysis and economic impact
Analysis undertaken as part of the planning and design process by Ekosgen and PWC show that Manchester’s economic and cultural strength supports two successful arenas.

There are several examples across the UK of two arenas in close proximity operating on a commercially viable basis, and no arena has ever closed when a new one has been brought forward in a single city or overlapping catchment area.

OVG’s proposals support the rebalancing of the national economy and ensure Manchester retains its rightful place as a nationally and globally competitive entertainment destination.

Location
The Etihad Campus is within a regeneration priority area, and was selected due to its suitability, availability, and viability for the proposed arena. It is an accessible site that is well connected to the centre by non-car modes, with significant sustainable transport connections to the city centre and beyond.

The location also enables Manchester to attract and retain a wide range of sports, e-sports and entertainment events, which often require the practice and warm-up space provided by the campus.

Jobs, skills and local benefits
The arena would create 3,350 jobs during construction, and more than 1,000 once open. OVG is committed to ensuring as many jobs as possible go to local people, will prioritise hiring people who live within walking distance, and have committed that all arena employees will be paid at least the Manchester Living Wage, which is significantly more than the statutory minimum.

OVG is already in discussions with Manchester City Council and will continue to work with them, as well as key education and work bodies, to define an employment and skills strategy, which will include apprenticeships, specific skills training in partnership with local education partners, local job fairs, and measures to encourage people to get back into work. 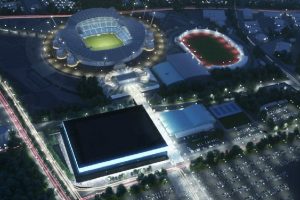 Transport
The site is very close to the city centre and there are strong linkages via sustainable modes of transport, which will be strengthened via the application proposals.

Proposals to come out of this consultation period include extensions to the existing Controlled Parking Zone (CPZ) to address concerns of local residents, improved walking routes and cycling infrastructure, and promoting and incentivising sustainable transport modes.

Transport studies show that 40% of visitors (or approximately 20,000 people) to the Etihad Stadium on match days currently do not arrive by car. This reflects the maximum capacity of most arena events and, therefore, clearly demonstrates the opportunity afforded by this location for sustainable transport enhancements.

Safety
Safety for visitors to the new arena is paramount, with a robust security strategy developed with Greater Manchester Police, counter-terrorism advisers, prevent advisors, OVG’s own pioneering security advisory service, and the existing Etihad Campus operations team. The requirements of ‘Martyn’s Law’ will be incorporated into the licensing conditions of the venue.

Inclusivity
Inclusivity is at the heart of the design, with proposals considering not only barriers that form physical constraints, but also barriers experienced by people who are neurodivergent, experience mental ill health, who are deaf, deafened and hard-of-hearing and people who are blind or partially sighted. The venue is aiming to be certified for the Attitude is Everything Gold Standard on opening.