AO World chief executive John Roberts believes lockdown and the impact of Covid-19 has changed his company’s market “forever” after the online electrical retailer unveiled a huge jump in sales. 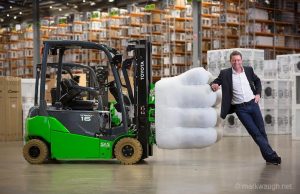 “This has been a half year like no other,” said Roberts. “Online is now the dominant retail channel for customers and manufacturers alike and I am delighted by how our AOers have risen to the challenge of this structural shift in behaviour.”

AO World has been one of the big business winners of the pandemic. Its share price closed last night at 420p – more than eight times higher than its level when lockdown began in March. The Bolton-based group is now valued at £2bn.

Roberts, whose personal stake is now worth £450m, added: “Now really is our time and we are investing to win and cement the change.”

In July AO World launched a long-term incentive plan for its employees to support the online retailer’s high growth strategy. It will share 10% of the value created above a market value of £2.5bn.

It said the rewards will be shared between all AO employees, with the “overwhelming majority” to be distributed to employees. Awards to Executive Directors will be capped at £20m, but that would require a market cap of £4.5bn by March 2025 that is then sustained for at least two more years.

Roberts has committed to donate 100% of any reward he receives under the plan to help disadvantaged young people in the UK.

AO World has continued to see strong sales growth, with October sales increasing faster than in the first half as the retailer benefitted from increased capacity, stock availability and the impact of investments made earlier in the year. It believes it is “positioned strongly” for the period which traditionally is its busiest.

Roberts added: “We have grown share across all categories and the results we’re announcing today give huge confidence that our business is well set for the future to cement the changes. Our growth rates have increased from Q2 to Q3 as we unlock capacity constraints.

“I would like to thank all AOers and all our trading partners for making such structural change possible in such a short period of time. It has been an incredible team effort to serve customers, existing and new, in their moments of need that I believe they will repay us with loyal custom for years to come.”

Russ Mould, investment director at Manchester investment platform, AJ Bell, said: “For years, AO has insisted it was on a path to profit and that strong levels of revenue growth would eventually tip the business into positive earnings.

“For most of the time, the market cast doubt over its ability to hit the profit goal, saying it was a highly competitive industry and AO’s German operations were holding the business back.

“The past 12 months have seen a radical change in opinion from the market as AO delivers on its goal and finally starts making a decent profit.

“Lockdown measures have been a major catalyst with AO seeing a significant jump in demand for electrical goods, providing the opportunity for it to show the benefits of good customer service and competitive pricing.

“If you needed a laptop to work from home or found your fridge overworked from stocking up on food and drink, then AO has been one of the retailers providing a solution.

“Its German arm is forecast to be profitable in the financial year ending March 2022, which would be another tick in the box for the business.

“However, there is still a nagging feeling that AO is in a purple patch which may fade away once society returns to normal assuming widespread COVID vaccinations.

“AO has been one of the biggest lockdown beneficiaries, but what happens when those restrictions ease and more people spend less time at home?

“A key sales tailwind could disappear, meaning AO will have to work hard to keep the customers it won during lockdown by encouraging them to buy other goods, as well as find ways to recruit more customers. That won’t be easy.”

JD Sports linked to Topshop bid by US retail giant