In its first trading announcement since floating on AIM in April this year, the online retailer that resells secondhand phones and other gadgets online in the UK and US said its financial performance for the period is in line with management’s expectations.

Growth has continued to be driven by an increasing consumer adoption of circular economy models to recycle and reuse items, along with a growing consumer trend to buy goods and services from brands with strong ESG (environmental, social and corporate governance) credentials.

In addition to the ongoing growth of its core re-commerce business, the group’s innovative new smartphone rental subscription service has made strong progress since its launch in October 2020.

The service provides customers with a more affordable and flexible option than an outright purchase or a pay-monthly contract with a mobile network. As at May 31, the service has achieved more than 7,500 subscriptions.

Chief executive, Steve Oliver, said: “We are pleased with the strong underlying momentum within the business as musicMagpie begins its life as a listed company.

“The performance in the period demonstrates that the business continued on its growth trajectory whilst we successfully completed our IPO in April.

“We have continued to capitalise on the favourable long-term trends that are driving musicMagpie’s growth as a leading re-commerce provider of consumer technology. We are particularly pleased with the performance so far of our new smartphone subscription service, for which we continue to see significant long-term potential.”

Mr Oliver is among a host of speakers lined up for sustainability conference In the Circle North West taking place on June 30, where transport, manufacturing, construction, supply chain, hydrogen sector, green finance, recommerce, and the North West’s response to the crucial COP26 summit will be under the spotlight.

The company is also behind a giant Mount Rushmore-style sculpture of the G7 leaders’ heads, made entirely of discarded electronics, that was has unveiled on a beach near to Carbis Bay, which is currently hosting the summit.

The sculpture, named Mount Recyclemore, aims to highlight the growing threat of e-waste on the planet as leaders of the world’s most advanced economies prepare to discuss how to tackle climate change and build a greener future.

Joe Rush has previously collaborated with the likes of Banksy, Vivienne Westwood and Damien Hirst to create art about environmental issues and is now working with musicMagpie to raise awareness of a more sustainable way to buy, rent and sell consumer tech by encouraging a circular economy. 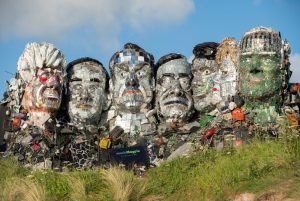 The arresting installation has been erected following research showing that the G7 nations alone produce almost 15.9 million tonnes of e-waste a year, with the US (6.9m), Japan (2.6m), Germany (1.6m) and UK (1.6m) being the worst offenders.

Steve Oliver said: “E-waste is a growing problem worldwide and its impact on the environment is significant. If sent to landfills, e-waste can leak harmful chemicals into the soil and water or if incinerated, fumes release chemicals into the air, contributing to global warming.

“Not only this, but everything from our phones to our laptops rely heavily on precious materials to operate, which are not only limited resources, but also directly impact climate change when being extracted from the earth.

“We need to better educate and empower people to make changes today.”