Base at Manchester Science Park celebrates topping out

Base at Manchester Science Park has now topped out, making it one of the first projects supported by the Government’s Getting Building Fund to reach the momentous milestone.

Work on Manchester-based Bruntwood SciTech’s £21m, five-storey, 91,000 sq ft development started in December 2020, led by main contractor Caddick Construction, and is progressing at pace. The steel frame and precast floor slab structure are now complete and work on the external façade can be seen.

Base has been specifically designed for companies working in high growth, frontier sectors of Industry 4.0, including low carbon, computer and energy technology, gaming, and animation. It will become a new specialist hub in the city, building on the region’s internationally recognised tech and manufacturing cluster.

When complete in spring 2022, it will offer a mix of office space, the capability for labs and a dedicated makerspace workshop for the prototyping of new, or modifying existing products.

The building will also include a welcome lounge, break-out spaces, meeting rooms and event space, as well as an impressive roof terrace with expansive views across the city’s Oxford Road Corridor innovation district.

Base will also be home to a new community innovation activities hub and vocational training centre committed to the rapid upskilling and retraining of young people and those from disadvantaged backgrounds. The new hub will focus on the specialist technical skills associated with low carbon technologies and innovation, and will aim to reach more than 5,000 local residents over the next five years and create in excess of 1,000 high value jobs in support of Manchester’s post-pandemic economic recovery.

It will be the first major redevelopment at Manchester Science Park to incorporate a number of sustainability measures which will help to reduce the building’s carbon footprint by 22% and achieve an EPC rating A.

These include 704 sq m of PV solar power which is expected to generate around 114 MWh of electricity per year, a hybrid heating and cooling system that will utilise water as a heat transfer, and demand side response built into the building management system to allow power to be drawn directly from the solar PV or battery storage.

More than 360 sq m of carpet from the old Base building has been recycled – 60% of which will be reused as flooring finishes, while the remainder will be turned into useful energy through a waste-to-energy facility. Battery capability has also been installed for future use.

The pedestrian links through the campus to Oxford Road are also being improved as part of the investment in the external landscaping which includes 50 new trees, wild grasses, bird nest boxes and below-ground beehives.

The development of Base is supported by a £15.5m loan from the North West Evergreen Fund, managed by CBRE’s Investment Advisory team, which is part of CBRE Capital Advisors. Greater Manchester Combined Authority (GMCA) also awarded a £4m ‘shovel ready’ funded grant for the construction of the building in support of the region’s economic recovery from the pandemic.

Tom Renn, managing director, Bruntwood SciTech-Manchester, said: “The redevelopment of Base underlines and reinforces our commitment to the growth and expansion of Manchester’s thriving digital technology and engineering sector alongside our own ambitions to be a sustainable, responsible force for good in the city.

“Base will play a significant role in supporting the growth of the city’s knowledge economy, a home for the next generation of science and tech businesses and a place where young people can develop the skills needed to thrive in their careers.” 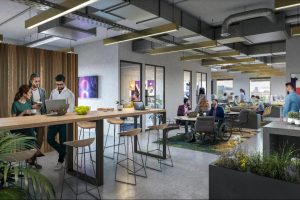 Design for smaller office space within The Base

Sir Richard Leese, leader of Manchester City Council, said: “After an incredibly difficult year for Manchester, projects like Base will be vital in supporting the city’s continued economic recovery.

“It is a sign of confidence that a shovel-ready project can be topped out in such a short space of time and proves there is still a tremendous desire for investment in Manchester and potential for continued growth. The Oxford Road Corridor is a key part of the city’s economic future and Base, when completed, will support our vision of making Manchester a city where everyone can share in its prosperity.”

Ian Threadgold, managing director, Caddick Construction North West, said: “It has been fantastic to work with Bruntwood SciTech on this exciting development. A successful project which will complete on time, delivering more high quality specialist space at Manchester Science Park.

“As part of our commitment to generating local employment, skills and training opportunities we have also recently welcomed students from Manchester College onto site to support the new Architectural and Construction Engineering (ACE) Scholarship in Construction and the Built Environment for 16-18-year-olds. It is a great opportunity for them to learn on a high profile and innovative development.”

The development is part of the latest phase of the masterplan for Manchester Science Park which will see the campus expand to one million sq ft and follows the successful opening of the Bright Building in 2017.

This important and significant milestone for Base follows the appointment of Bruntwood SciTech in June as the University of Manchester’s joint venture partner for ID Manchester.

Base is designed by Bridge Architects and supported by Walker Sime, Buro Happold, DW Consulting Engineers and BDP.