A redevelopment project has added fuel to its fire after Historic England committed to support the renovation of a 30-metre chimney that is a prominent landmark on the Stoke-on-Trent skyline.

Its owner, Kirklands Properties, has made a successful bid for 90% of the £100,000 costs of repair and renovation of the former pottery works’ chimney.

Mark Milner, director of Kirklands Properties, said: “The chimney dates back to when the factory was originally built in 1881 and is a familiar feature above the Longton skyline. 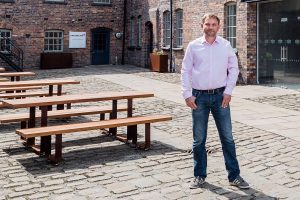 “While we have no future use for the chimney or the bottle kilns on site, we see their preservation as part of our duty as custodians of an important part of Stoke-on-Trent’s history.”

The former Thomas Forester and Sons factory, Phoenix Works, in Longton, is now an office and retail space. The office space is currently occupied and a further 6,000 sq ft is now being renovated to create more space.

Stoke-on-Trent City Council’s heritage and design team is working with the company on the regeneration of the Grade-II site.

Team manager Jane Corfield said: “Mark has created a positive and attractive destination in Longton and it is great to see how good modern design sits in this historic context to achieve a best-of-both solution.”

Kirklands Properties also has a long-term ambition to convert a large, undeveloped part of the former majolica works into housing.