Stoford has submitted a planning application for the BBC’s new Birmingham home at the historic Typhoo Building in Digbeth.

The corporation is hoping to move from its current home at The Mailbox to the new 84,001 sq ft custom-built centre in 2025. The Bordesley Street landmark will be one of Birmingham’s first net zero carbon in construction office buildings.

Gerard Ludlow, director at Stoford, said: “The feedback from the public – both those who live or work in Digbeth and the thousands of people we reached via social media who are just interested in the scheme – has been overwhelmingly positive. Birmingham’s residents, visitors, and commuters are genuinely excited at the prospect of the BBC making its home at such a recognisable and prominent building. 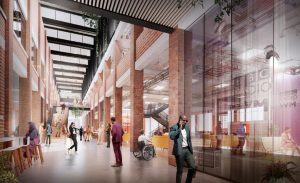 “Typhoo Wharf is a significant opportunity, which will not only catalyse reinvigoration of the wider area, but will also help to kick start further private and public-sector investment into Digbeth’s built environment and transport connections.

“Central to our Typhoo scheme is the commitment to conserving the historic building, which dates back to 1929 but has been left empty for decades.  The BBC’s new home will be instantly recognisable to everyone who travels into Birmingham on HS2, the tram, or into our existing railway stations.”

Stoford is working with The Gooch Estate, Glenn Howells Architects, Turley and several public sector partners to deliver the development and to prepare a vision for the wider area, which will be served by multiple public transport connections, including a new tram top, HS2’s Curzon Street terminus, and the existing Birmingham coach and Moor Street railway stations.

Over the next decade, Stoford plans to deliver up to 800,000 sq ft of new residential, office and hospitality accommodation around the new BBC. The wider scheme will see more than 10 acres of underutilised land around Typhoo Wharf and the adjoining canal basin transformed into a new mixed-use neighbourhood.

Grant Associates is designing the new landscape and urban realm, which will create a new canalside quarter centred on the canal which used to bring tea in and out of the original Typhoo building. The new public square will be delivered in time for the first BBC staff to move in in 2026.