A £23.4m funding package has been provided for two Midlands projects with Elevate Property Group. 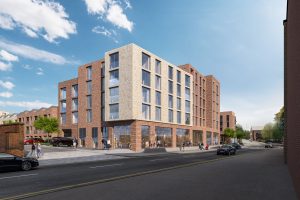 Imperial House on Homer Road will consist of a mix of one, two and three-bedroom apartments. Construction has commenced and is due to complete in Autumn this year. Elevate has appointed Kavannagh Construction as the main contractor – its second deal with Kavannagh after Heaton House in Birmingham.

The Muller Yard at Elevate’s Trent Bridge Quays project will be a mix of 44 new build apartments and 14 townhouses, plus two commercial units, on the banks of the River Trent. Construction started in April and is due to complete in July this year. Elevate has selected Bode Contracting for the project.

This is the third and fourth deal between Paragon and Elevate, following the bank’s funding of Priory House in Birmingham and Phase I of the Trent Bridge Quays project.

It comes after Elevate has completed its payment on the £13.3m provided for the purchase and redevelopment of Priory House. The former Birmingham forensic science laboratory, located in the Southside has been transformed to create 79 luxury apartments.

Both deals were led on behalf of Paragon by Relationship Director Toby Burgess and Portfolio Manager Joshua Mann.

Burgess said: “Buyers like Elevate Property Group developments because they offer well-designed spaces with a much higher specification than is commonly seen.

“We’re also delighted to have been involved in the Priory House scheme, which has brought a landmark building back into use in the heart of a vibrant and up-and-coming part of the city.

“This was a great project to kick-off our relationship with Elevate and they have been hugely successful in delivering the scheme quickly despite the challenges in the construction market post-Covid and then achieving impressive sales allowing them to repay our facility in less than 21 months”.