Work begins on next generation homes in north Sheffield

Sky-House Co, the Sheffield based house builder, has started work on its Riverside Oughtibridge Mill development.

The north Sheffield site, will see the development of the next generation of Sky-House product, designed by the team at Sheffield’s CODA Architects and feature 35 new Sky-House homes to accompany the conversion of the existing old cottages into five properties plus the conversion of the old Mill into a community food hall – in the picturesque Don Valley setting.

The developer expects the first ten homes to complete later this year and early in 2022.

With work underway the business has also launched its sales for the site including an online VIP club to help manage the high demand for the site which has seen 450 enquiries for 40 properties.

Sky-House director David Cross said: “VIP buyers will be invited for a one-to-one meeting at the new Sky-House HQ to pick their property over a glass of wine, local beer or just a good cuppa!

“Buyers can meet our in-house architects and choose how they wish to personalise their future homes.”

Sky-House Co has bold ambitions to grow to 250 new homes per year in the coming years with the continued support of Homes England – the government agency charged with helping SMEs deliver more homes – and LLoyds Bank, which has supported the group’s other new development at Fox Valley in Stocksbridge. 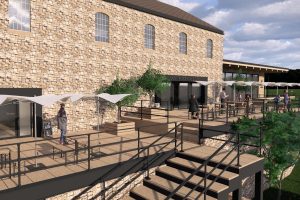 Sky-House chief finance officer Philip Prince said: “We have a solid pipeline of sites and homes alongside a series of strong funding packages which when coupled with the strength of our growing team means the future looks very bright and very busy.

“We are committed to the region, to buying local and recruiting and training local and we have some exciting new initiatives due to be launched soon.”

It has also been confirmed that Sheffield’s acclaimed Milestone Group are in talks to launch the city’s newest food hall in the site’s historic Old Paper Mill, providing a fusion between pop-up food stalls and a high end deli.