Pre-application plans for a £270m mixed-use city centre development at the former international swimming pool site, in Lisbon Street, Leeds, have been presented to councillors.

Members of Leeds City Council’s City Plans Panel were told today that a full application for the ambitious proposals could be made within the next couple of weeks, with the applicant hoping to secure permission by late summer in order to start building work this autumn.

When a formal application is submitted, the developer will seek full permission for two 33 and 22-storey towers providing up to 629 Build to Rent (BTR) homes, two commercial units at ground floor level across one of the BTR buildings, a 550-bed, 24-storey student residential building and a 15-storey aparthotel building providing approximately 120 rooms and 34,550 sq ft of office accommodation.

There would also be landscaping work, enhancements to an existing pedestrian/cycle bridge, and a 53-space basement car park beneath the residential buildings. 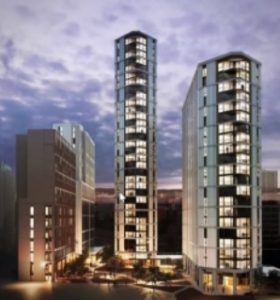 Finally, outline planning permission will be sought for an 11-storey office building of up to 118,400 sq ft, which would have a 50-space basement car park.

The site earmarked for the scheme covers 2.4 acres, 55% of which would be given over to public realm as part of the project.

A spokesman for the applicants told councillors: “This is an opportunity to bring this part of the city centre back to life. It’s a key piece in the jigsaw of the city.”

Responding to questions from councillors he said it should be possible to convert the aparthotel to residential use at some point in future if the business operation turns out not to be viable.

And he said the 7% allocation for three-bed homes within the residential part of the site was seen as appropriate for this type of Build to Rent, city centre development.

The applicant team, Marrico Asset Management and Helios Real Estate, was selected as the council’s preferred bidder following the marketing of the site by Leeds City Council in 2019/20.

The proposals have been the subject of pre-application discussions between the developer, its design team and Local Planning Authority Officers since December 2020.