Regional leader weighs in against any move to privatise Channel 4

Privatising Channel 4 would be “profoundly damaging to UK broadcasting and the creative industries” according to Roger Marsh, who chairs Leeds City Region Enterprise Partnership and NP11.

In a strongly worded warning against the Government’s plans for the channel, Marsh says the possibility of privatisation has cast a shadow over Channel 4’s move to its new base in Leeds city centre’s Majestic building.

He said helping to bring Channel 4 to Leeds had been one of the proudest achievements of his professional life.

Stressing that the channel is in robust financial health, he emphasised that as an advertising-funded publisher-broadcaster, it operates without cost to the taxpayer.

“This model is of enormous benefit to independent producers, allowing them to retain intellectual property rights and generate revenue from global sales, which can be reinvested in developing talent,” he explained

“Channel 4 choosing Leeds has been a catalyst for our region’s important and fast-growing creative and cultural sector.

“On the back of the decision, some of the UK’s largest independent producers, such as The Garden and eOne, have moved to the region with others such as True North, Daisybeck and Candour expanding their presence.

“This is alongside over 110,000 sq ft of new studio space and production facilities opening at the new Leeds Versa Studios and plans for more studio space in the pipeline.

“These decisions to invest in our region, alongside significant public sector financial support, have been made in good faith on the basis of Channel 4’s long-term presence and commitment to the North. 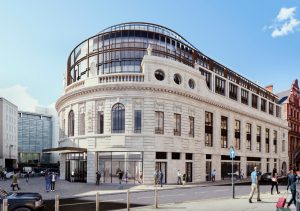 “Already, Channel 4 has contributed £105m to the economy in the North of England, supporting 1,132 jobs.

“More broadly, in 2019 it contributed at least £274m to the regional economy, as well as supporting around 3,000 jobs in the Nations and Regions.

“It also supports the aspirations of our young people, demonstrating that they don’t have to move down to London to build a career in the media.

“We estimate that over the next 10 years Channel 4’s presence in Leeds will add £1bn to our economy and create a further 1,200 skilled jobs in the creative sector and supporting industries.

“This is a concrete example of levelling-up in action and the Government’s commitment to better serving the North, which would be put at risk if Channel 4 were in the private sector.

“Independent analysis from EY shows that over the next decade, a privately-owned Channel 4 that is no longer a publisher-broadcaster could leave the UK creative sector £2bn worse off, with a quarter of jobs in the independent production sector at risk.”

Marsh said that while there may indeed be a case for “tweaking” the broadcaster’s operating model, privatisation is not the answer.