Following a purchase in August 2021 and planning approval in December 2021, developer Grantside has agreed a sale to By Mansley Group to revitalise a prominent building in York city centre.

The former New Look Store at 4-6 Parliament Street, which is currently occupied by The Vintage Store, was bought last year by York developers Grantside and North Star.

Planning was secured to transform the underused upper floors into 19 holiday apartments and this part of the building has now been sold to serviced apartment specialist By Mansley Group. Grantside will deliver the completed apartments to them in late 2023. 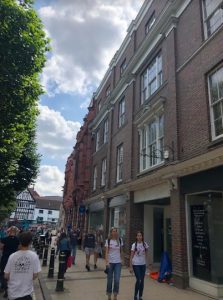 The remaining ground floor and basement space is set to undergo an extensive refurbishment to bring it up to modern standards, following the short-term letting to The Vintage Store.

York-based architects Vincent & Brown designed the remodelling of the 15,530 sq ft building which will now include separate entrances for the retail and residential accommodation.

Steve Davis, CEO of Grantside, said: “As a proud York company it is great news to see major progress as we breathe new life into this key building and give it a sustainable new future.

“We are excited to get ready to start work on updating the existing retail space and refurbishing and renovating the upper floors back into beneficial use for serviced apartments.”

Grantside was established in 1993 and has delivered over £850m worth of real estate across the UK.

The company has ongoing projects in York and Sheffield city centres and is pursuing other opportunities, both by itself and through joint ventures with other property companies.

By Mansley operates serviced apartments in Mayfair, Kensington, Cheltenham, Edinburgh and Inverness but this will be its first operation in Yorkshire.

Creative workspace concept aims to turn convention on its head