When it was announced that BioCity had been sold yesterday for £120m to a new joint venture it marked the end of the first two decades of continuous investment in the life sciences sector from its Nottingham base.

Its new owner, the We Are Pioneer Group – a JV between Chicago-based real estate investment firm Harrison Street and its London counterpart Trinity – has formed the largest innovation ecosystem for the science and technology industries with the transaction. The company now boasts some 7.5% market share and is home to 600 companies.

This is a far cry from when BioCity was formed in 2002 by the University of Nottingham and Trent University. The newly-formed company moved into a former BASF research centre in a run-down part of Nottingham.

However, BioCity soon forged a unique identity for itself and became a true UK hub for the life sciences and innovation sector.

In 2012 BioCity acquired the MSD research facility in Newhouse near Glasgow to create Glasgow, BioCity. This was closely followed by a second site in Nottingham, MediCity, which is located on the Boots campus and is a collaboration with Walgreens Boots Alliance. In 2016 the Newhouse site was further expanded to create Glasgow, MediCity. BioCity also operates at Alderley Park, Cheshire, Aberdeen and Newcastle.

Through 2019, BioCity made a series of investments in fast-growing firms after landing a deal from BGF and Blue Skies Investments. It then went on to take stakes in Nottingham-based Deep Branch Biotechnology, INCUS Performance and Kinomica. To date, BioCity has invested in around 30 companies.

Latterly, BioCity has been at the centre of the fight against Covid-19, with its biggest Nottingham tenant, Sygnature Discovery helping Professor Sachin Gupte, a pharmacologist at the New York Medical College, in finding a drug treatment for the lung damage that can result from Covid-19 infection. 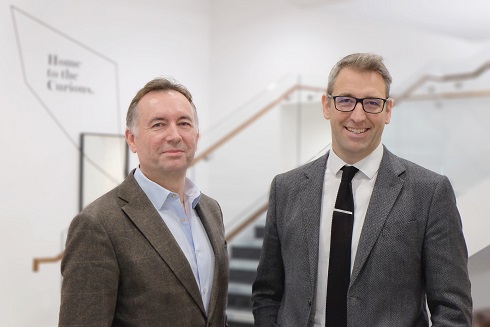 BioCity’s genial CEO, Toby Reid, said yesterday: ““We have bootstrapped our way from ‘probable white elephant’, as labelled by the Financial Times in 2003, to ‘successful lab experiment’ (FT 2008), to ‘one of Europe’s fastest-growing companies’ (FT 1000 report 2017) and now one of the most replicated business models within our industry. What we have achieved is incredible, but that is not to say it has been easy.

“As a team, we can attest to the hard work behind the scenes in making that vision a reality. So, while we will soon be looking to the future, I want to take a moment to reflect on what we have achieved. I am immensely proud of all that we have built together.

“This is by no means the end of our hard work. Our public/corporate identity and email addresses will change, but who we are, what we are trying to achieve and most importantly, why, remains the same. To provide a home to the curious and help pioneering science ventures to make it out of the lab and into the world, to tackle the biggest global health and environmental challenges.”

Much credit for the success of BioCity must also go to Dr Glenn Crocker, Reid’s successor. Crocker stepped down in December 2018 after 15 years heading the business. At the time, he said: ” “I am immensely proud of what we have been able to achieve as a team at BioCity and have thoroughly enjoyed working with great people and companies. However, after more than 15 years, it is time to hand the baton on in an orderly way to my successor. Having worked closely with Toby for many years I know he is more than ready to take on this role and will no doubt take BioCity and the companies we work with to even greater success.”

With a £120m deal in its back pocket, Nottingham’s very own beacon of innovation looks set to shine for some years yet.