Pegasus Group has announced the promotion of three senior directors to executive directors.

Dan Bentley from Group (IT) Services, Steve Lewis-Roberts from the East Midlands office and Sarah Hamilton-Foyn from the Cirencester office are all promoted to an equity position within the company. All three had become senior directors in 2019.

CEO Jim Tarzey said: “Pegasus Group is proud to recognise the talent and hard-working ethos of these three individuals and is committed, where ever possible, to promoting from within.

“I am personally delighted that Dan, Steve and Sarah are the first to formally be made executive directors under the tenure of the new executive board, although the decision to endorse them as executive directors was made internally during 2020. Each has a proven track record of professionalism and excellence and it is now pleasing to see them take well deserved equity positions within Pegasus Group.”

Lewis-Roberts joined the company in 2014 as an sssociate making director in January 2015 and was appointed to regional director three years later. As the former head of development management at Charnwood Borough Council, he has more than over 20 years’ experience of development control and enforcement. 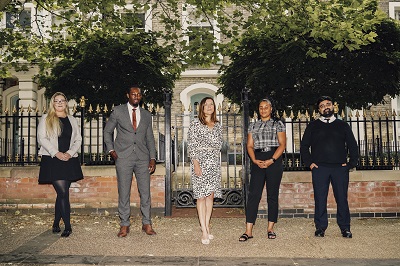 Smith Partnership has bolstered its operation in Leicester by hiring five new staff.

Paralegal Sophie Wilson has arrived from the Josiah Hincks law firm and will add even more strength to the same division.

Meanwhile, Samuel Mason, a solicitor who specialises in family law, is also joining the Leicester team from Dodds Solicitors where he had spent four years.

Also joining are conveyancing legal executive Marcus Samuel-Brown and Paricce Davis who has become a legal secretary in the commercial property department.

Neate said: “I am delighted to be able to add to a wealth of talent to our Leicester team.

“Our hard work at immersing ourselves in the community is being reflected by a big increase in caseloads which meant we were able to sign people of the highest calibre,

“I look forward to working with them all and continuing to expand our offer in Leicester and Leicestershire and, in some cases, beyond.”