Kitchen residency offers menu inspired by flavours of the Levant

From today the kitchen at Leeds restaurant, Kino, will be taken over by independent food trader MorMor, beginning a kitchen residency that will last until the New Year.

MorMor will be the first of longer-term kitchen residencies and guest chefs to take over the kitchen space at Opera North’s brand-new city centre restaurant.

Since opening in early July, Kino has offered an informal showcase of some of the region’s finest charcuterie and cheeses, alongside an extensive wine, craft beer and cocktail selection. 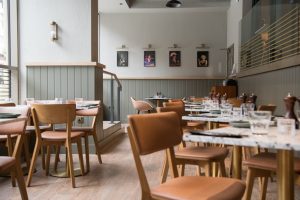 MorMor’s food offer is inspired by a love of the varied flavours, street foods and cultures found in the Levant, drawing on the heritage of a region spanning the eastern Mediterranean, North Africa and the Middle East.

It has devised a full menu of mezze, small plates and large plates for Kino including contemporary dishes such as Rack of Lamb with Za’atar, Chermoula Yogurt, Roast Squash and Flatbread, Soft Shell Crab with Preserved Lemon Aioli and Butter Fried Samphire, and Grilled Aubergine with Date and Dukkah Crumb and Tahini Yoghurt.

Alongside the new a la carte menu is a fixed price pre-theatre menu, offering a selection of three dishes for £18, or four dishes for £24 per person.

A new dessert menu is also being introduced, featuring sweet treats to complement MorMor’s eastern Mediterranean style, including Baklava and Pistachio and Vanilla Opera Cake, alongside classics such as Crème Brûlée Cheesecake.

Kino is next to Leeds Grand Theatre, where Opera North is a resident company, and below the Howard Assembly Room, a 300-seat live events space. 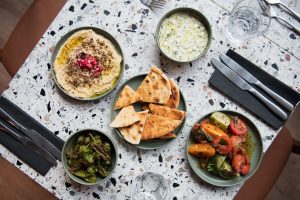 Richard Mantle, general director, Opera North, said: “We are thrilled to welcome MorMor today to begin the first kitchen residency at Kino, extending our dining offer with their vibrant and contemporary Levantine-inspired dishes.

“I’m sure their residency is going to prove a huge success and will create many memorable experiences for diners.”

Hugo Monypenny, of MorMor, added: “The pop-up at Kino last month was incredible and we can’t wait to take over the kitchen again from 14 September for a proper residency. Thank you so much to the Kino team for putting so much trust in us.”

Kino is open on Wednesday and Thursday evenings, and all day on Fridays and Saturdays.