One City Park, a brand new office development under construction in the centre of Bradford, has reached its highest point and is on track to complete in summer 2023.

The building will accommodate 56,403 sq ft of sustainable office space and is being brought forward by place maker, Muse, in partnership with Bradford Council.

It is being built by Caddick Construction, with the steel frame supplied and erected by Halifax-based Elland Steel. This is the first new office space in Bradford city centre for 20 years.

Simon Dew, development director at Muse, said: “The construction programme is being delivered at pace and to be on schedule is testament to the hard work everyone involved. 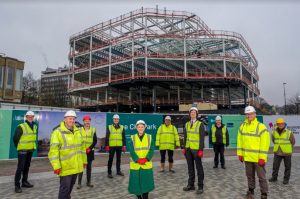 “Bradford is a diverse city full of potential and we want to attract the right businesses to One City Park and create a wealth of opportunities for the rich talent within the community.”

Once complete, the building will feature five floors of workspaces and a roof terrace. It will offer flexible floor plans and is designed to suit a range of businesses from home grown starts-up and SMEs, through to larger organisations and multi-nationals.

Jason Sims, Caddick senior project manager, said: “It’s always gratifying to see the steelwork completing and topped out as a visible milestone for the city centre.

“It’s a real boost for the site team but we are also getting positive comments from passers-by who see the progress made day-by-day because it’s such a central and significant development for Bradford.”

Councillor Alex Ross-Shaw, Bradford Council’s executive member of regeneration, planning and transport, added: “One City Park is bringing hundreds of jobs to the city centre throughout its construction and once complete will bring hundreds more.

“It will be a great complement to the Darley Street Market, which is also currently under construction.”