It estimates the two-bedroom home, built with modern methods of construction, which runs on renewable energy could generate a surplus up to 10,000kWh of electricity a year. The start-up said it has potential 500 buyers lined up to see the energy-generating lodge in action.

The first-of-its-kind lodge has just been delivered to Darwin Escapes holiday park located in North Wales, which will allow customers to see the innovative holiday home concept for themselves.  As the lodge is a volumetric modular construction, it took just a day to install. 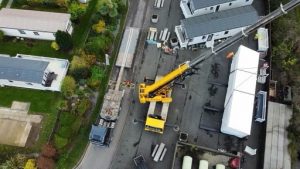 In addition to holiday homes, CurveBlock is pushing the idea for social housing.

“What’s sparked interest with regards to things like social housing, you can effectively have a modular, energy-positive core, and skin it in traditional walls,” said CurveBlock co-founder Gary Woodhead. “It’s not just a one-trick pony. That market effectively can be developed for social housing with normal residential housing. We’ve just partnered with Bradford Council to do a social housing pilot with Innovate UK.”

CurveBlock has a second string to its bow. It’s getting ready to launch the beta phase of its blockchain-based property investment app, which will allow investors to put as little as £10 into development projects once they’ve passed FSA-required personal and financial checks.

“We’re currently at an interesting stage of our roadmap,” Woodhead added “Our active EIS seed round now has over 40 Angel investors, We’re also looking at market entry into social housing with the same innovation. We have to ensure the fintech side of CurveBlock, the shared economy,  will always be submerged across various markets to mitigate sector risk.”

The firm has recently joined the Hyper Protect Accelerator run by Village Capital and IBM.

“Out of the 230 startups that made it to interview stage, 15 of what they deemed to be the Next Big Thing made it through, of which we were one. Yes, they want to integrate IBM services onto our platform. It’s all really, really exciting stuff knowing that some of the industry giants are warming to what was just a concept four years ago.”

Creative workspace concept aims to turn convention on its head