Construction work on the 10-storey Unity Square – the new UK Government Hub in Nottingham, which will be home to HM Revenue and Customs (HMRC) and other government departments – has now completed.

The Grade A office scheme in Queensbridge Road has been eagerly anticipated since it was announced in late 2018 that HMRC, which is leading the delivery of Phase 1 Government hubs, had entered a 25-year pre-let on the development for the Government hub with Peveril Securities and its joint venture partner Sladen Estates.

Ralph Jones, managing director of Peveril Securities and main board director of Bowmer + Kirkland, said: “HMRC’s decision to award this Government Hub in the heart of Nottingham to Peveril Securities and Sladen Estates shows the confidence that HMRC had in our ability to fund and deliver this important scheme above other locations and developers that could have been in the running. It is hugely significant for the region, as well as for everyone who lives and works here, transforming the area around the city’s train station. With thousands of people set to work in the offices, businesses in the area will benefit from the increased footfall of workers in the area.

“Those working in the building will benefit from Nottingham’s superb transport links, being right next to bus, train and tram services. The structure also serves as a remarkable landmark for commuters arriving at the train station, providing the sort of impressive development you would expect on arrival in one of the UK’s major cities.”

The official handover of the regional hub took place on Tuesday (11 May) via a virtual ceremony.

Colin Casse, locations programme director at HMRC, said: “HMRC has a long-standing presence in Nottingham and the new Government Hub will be home to our Nottingham Regional Centre. A stunning building, right in the heart of the city, 1 Unity Square will provide a flexible modern working environment that can be adapted as our ways of working develop in the future. We are looking forward to the first colleagues moving into the building early in 2022.”

The scheme has been constructed by Derbyshire based Bowmer + Kirkland, with the contractors having to contend with the coronavirus pandemic during the final stages of the build.

Steve Chambers, regional director at Bowmer + Kirkland, said: “We are very pleased to have completed this significant project on time in what has been a very challenging environment. Working closely with Peveril Securities, Sladen Estates, HMRC and L & G has allowed us to overcome the challenges we have encountered – particularly during the past year – and I would personally like to thank all of the staff, trades people and companies involved in the project who have worked extremely hard in very challenging circumstances to deliver the scheme.” 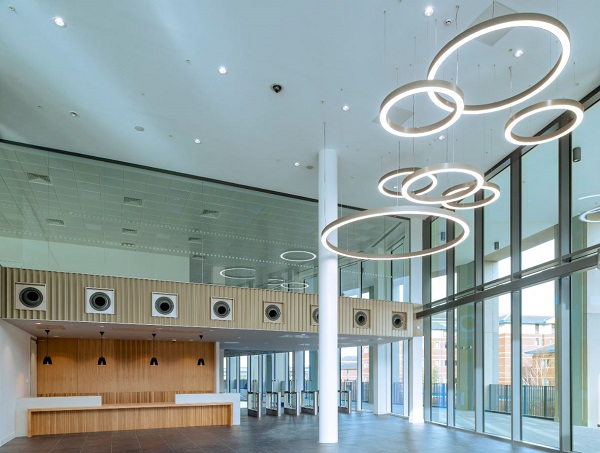 Designed by Manchester-based award-winning architecture firm 5 Plus, the development is set to be one of HMRC’s largest regional offices, accommodating more than 4,000 staff.

Nick Sladen, chief executive of Sladen Estates, said: “Every development has faced challenges over the past year, but we are really pleased that despite the coronavirus pandemic, Bowmer + Kirkland have been able to keep Unity Square construction on track.

“Unity Square will have a positive impact on job creation and the economic growth of the area. It should prove to be a spark for significant regeneration in the Southside of Nottingham and provides a striking addition to the city skyline. We are really pleased that despite the coronavirus pandemic and all of the labour and material sourcing issues that caused that the scheme continued on track for its original target completion date.”

Peveril Securities and Sladen Estates bought the 1.14-hectare site in Queensbridge Road – opposite Nottingham train station – in 2015 and demolished the existing derelict car parks before embarking on the city’s largest and most eagerly anticipated scheme, with the government hub being forward funded by LGIM Real Assets (Legal & General).