Home / West Midlands / Viewpoint / Is it a metaverse of opportunities for businesses?

Is it a metaverse of opportunities for businesses?

The Metaverse, a hot topic amongst the global tech scene, particularly since Facebook’s parent company changed its name to Meta.

But what does it mean and why does it matter?

Simply put, it’s an evolution of the internet which will allow “persistent online 3D Virtual environments.”

In other words, it’s a “digital world” with real people represented by digital objects.

This concept isn’t new. In the early noughties Second Life was thought the be the future of real and virtual integration and perhaps was the precursor to the metaverse.

However, with access to technology growing and with videogames already creating persistent online worlds where everything from live concerts to virtual exhibitions can take place it feels like the move from Matrix-esque science fiction to a new reality is a genuine possibility.

Interestingly and linked to the potential of the Metaverse is the growth in interest of both VR and XR (virtual and extended reality).

Within Leeds, XR Games has been championing the potential of extended reality, with the studio’s founder Bobby Thandi telling me in 2020 that over the next five years virtual reality and extended reality experiences will become mass market, leading to the start-up developers of today being the valuable businesses of the future.

Thandi however isn’t alone, his former employer Dubit recently raised $8m to launch a metaverse esports league, and was described recently by The Times as “the largest British company developing games for the metaverse”, employing more than 100 designers and programmers.

Speaking after announcing the funding, Dubit co-founder, Matthew Warneford said the business was looking to pioneer how brands could enter the metaverse and was working to “create massively interactive live events in music and fashion that brands can partner with”.

However Thandi and Warneford aren’t alone in exploring the potential of the technology, which goes far beyond just the entertainment sector. 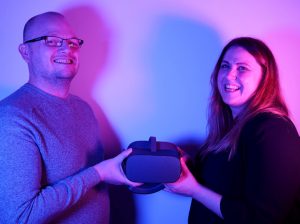 TheBusinessDesk.com’s Disruptor of the month for January, AnotherSpaceVR, is in fact utilising virtual reality as a means to help schools and students to address disruptive behaviour.

However this trend isn’t unique to Yorkshire. Right across the UK businesses are looking to take the virtual world by storm.

At the end of 2021 Sony was named as Manchester City’s “virtual fan engagement partner” which will see the Japanese tech giant recreate the Etihad in the metaverse with the two businesses seeking to develop what the press release described as “new digital fan experiences”.

While in the Midlands Professor Bob Stone from the University of Birmingham notes that the pandemic has accelerated the need for virtual solutions to activities such as conferences and events but also that investors are already engaging with the market.

Stone also noted that in April of 2021 Decentraland – an open source 3D virtual world – sold 40,000 sq m of virtual space for $572,000, while much has been made about the rise of NFT (non-fungible token) art, which is designed to be displayed in virtual spaces.

He also said that the current “metaverse market” is “confused, frenetic” and “a highly risky stage show”, but that it will likely become as ubiquitous as the internet is now.

So will we see city centre offices deserted and people logging in to a virtual Wellington Place, Spinningfields or Colmore Row?

I think it’s unlikely in the short term but with everyone talking about offices being places to collaborate surely the virtual offices which will be in the metaverse will provide a geographically agnostic location for people and businesses to come together, challenge and create the future.

It will be interesting to see how this evolution continues as the world continues to evolve post-pandemic and as the next generation of talent which won’t remember a time before Wikipedia or even a dial up internet connection, comes through.

Strategies for scaling up: Meeting the challenge of hiring for growth...

Midlands companies are perfectly placed to build UK and international...

Strategies for scaling up: Achieve scale at speed with a buy and...